Please download a powerpoint presentation on the  Congregational history here. 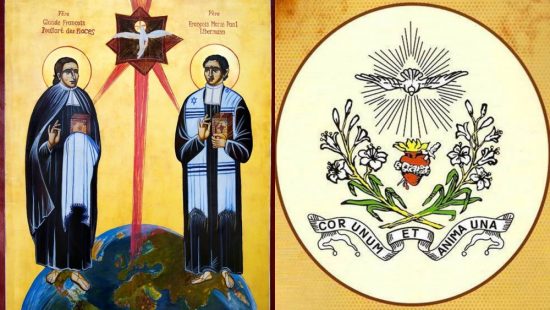 The Congregation of the Holy Spirit was founded in Paris by Claude Poullart des Places in 1703. Born into a rich family from Brittany, Claude Poullart des Places gave up a potential career as a lawyer and, with a profound concern for the poor, he decided to become a priest. While studying for the priesthood he founded a house for destitute seminarians. He died in 1709 at the age of 30.

Francis Libermann was born in 1802, the son of a Jewish rabbi in Alsace. After a period of questioning and uncertainty, he converted to Catholicism. He spent time in various theological institutes studying to be a priest and was keen to establish a society for the care and education of freed slaves. He was ordained in 1841 and the same year opened the novitiate of the new society “the Society of the Holy Heart of Mary”. In 1848 all its members joined what was now called the “Congregation of the Holy Spirit under the Protection of the Immaculate Heart of Mary” with Libermann as Superior General.

Even before Libermann’s death the Congregation had grown and developed its educational, missionary and pastoral work in France, its colonies and elsewhere. A year after Libermann’s death, a national senior seminary for the French clergy in Rome was established and in the next three decades over thirty junior and senior seminaries and colleges, as well as fifteen trade and agricultural schools (mostly staffed by Brothers), were opened in countries such as France, Portugal, Trinidad and the United States of America.

The Congregation’s Irish Province was founded in 1859 and it soon became evident that providing education would be essential in the search for Irish missionary vocations. Blackrock College in Dublin opened in 1860, Rockwell College in Tipperary four years later and St. Mary’s College in Rathmines in 1890. St. Michael’s College and Templeogue College, both in Dublin, opened in 1944 and 1966, respectively, while the Congregation is a joint patron of Holy Family Community School, Rathcoole which opened in 1981.

Educational activity was also central to missions dependent on the Irish Province. In West Africa a leading figure in this development was Bishop Joseph Shanahan; Onitsha diocese in Nigeria had 4,000 schools in 1932. Many secondary schools and hundreds of primary schools were opened in Kenya and Tanzania under the management of Spiritans. By the time of Vatican II, the Congregation worldwide had about eighty public seminaries and colleges in addition to about fifty houses of study reserved for its own aspirants.

While the independence of many new nations allowed the Congregation to hand over responsibility for many of its institutions to public education systems, a survey in 1991 at an international symposium of Spiritan educators at Duquesne University (formerly Holy Ghost College, Pittsburgh) indicated that 304 members of the Congregation still had responsibility for involvement with 22 schools, 141,000 students and 7,000 teachers.

The Educational ethos of the Congregation incorporates  Openness to the Spirit, A Sense of Community, Option for the Poor, Global Vision, Commitment to Service, High Educational Standards and Holistic (Personal and Faith) Development.